In my quest to develop the most stunning and original idea for a book, I’ve discarded hundreds of cliché or average ones. My reasoning? No one wants to hear the same story twice.

If I had stopped to think about that statement, rather than continue skipping merrily down Stupid Road, I would have realized some things. 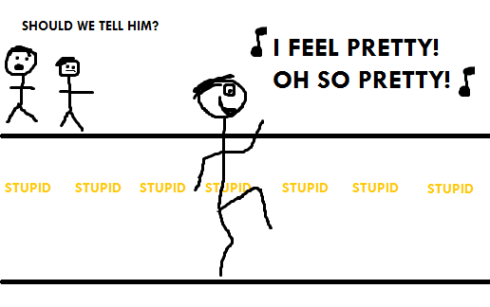 First, that I am on Stupid Road.

Most importantly though: great stories are in the telling, not the tale.

This is not an epiphany for anyone but it bears repeating. For me at least, I was so caught up in figuring out my “Harry Potter” plot that I failed realizing what really mattered, like… the whole writing part.

I claim your plot doesn’t have to break molds.

Exhibit A: The Twilight Series

You might think this example contradicts what I’ve said because it’s cool to hate on Stephenie Meyer’s writing.

The one thing she does well is capture the end-of-the-world importance of teenage love— twice— then push each relationship closer to the edge, all while you’re screaming “Team Jacob!” or “Team Edward!” or “Wife, please stop telling me about your book.”

I’ve read them. I even didn’t hate them, for the exact reason of this post: she crafted love between characters that pulled you in. What’s more basic than that? The whole vampire/werewolf thing is secondary; a hairy, sparkly, fang-y backdrop to the intertwined lives of Bella, Edward and Jacob.

Before you rush to yell at me for thinking Stephenie Meyer is a fantastic writer, I do indeed think that she is average at best. Though what she does right, the relationships, drives people mad for her books. It’s also why the fourth book sucks. The relationship turmoil is resolved and the book collapses with only a dilapidated plot and an “I guess that’s the end” climax to stand on. More proof that I will stuff in my pockets.

Exhibit B: Owning the Movie

This one is debatable, but I’ll just delete your comments if you disagree. Long live me.

People buy movies because they are so enamored with that version of the telling, they want it retold to them multiple times. They know EXACTLY how the movie is going to end, what the conflict is, all of the twists, the happily ever after.

Mysterious destination isn’t what keeps us enraptured. It’s the artful telling that drags us in, pulling along the same worn path while we marvel at the scenery.

The beauty of story-telling is that the same story can be told so many ways. But it’s a double-edged sword, bestowed with the Power of Suck, a power we all wield, that stabs our story in the back when we stop honing the other side of the blade.

I used to think I needed a perfect plot, floated down from the clouds by a Muse. I realize now that I need about 14 mediocre plots to toil through and fine tune my craft.

We all have different voices and motivations and when we learn to harness the power of our unique narratives, everyone will listen to our tales, even if they’ve been told a hundred times by Disney.

6 thoughts on “Watch Out Edward and Jacob, Team Storytelling is in Town”